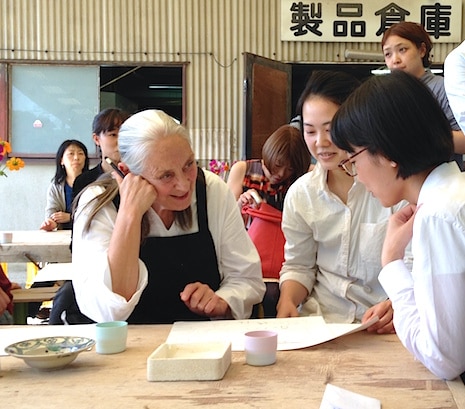 The essence of monozukuri as practiced by Ingegerd Råman

Ingegerd Råman, the renowned Swedish designer participating in the 2016/ project and making her second visit to Arita, lectured at the Kyushu Ceramic Museum on October 3, 2015, followed the next day by her first workshop at the Sehyou Kiln in Imari City.

Ingegerd Råman, a participant in the 2016/ project, is one of Northern Europe’s most prestigious designers, and she is now promoting monozukuri (art of manufacturing) with potteries in Arita. In this her second visit, she took the opportunity to not only check on the progress of product development, but also gave a lecture and held a workshop as a part of the platform (intention and environment) formation project.

Ingegerd Råman was awarded the title of professor by the Swedish government, and the Prince Eugen Medal by His Majesty the King of Sweden; she is a world-class designer of glass and ceramic ware. Her approach to monozukuri – the value of my design appears only after the article is used – has attracted increasing numbers of fans in Japan, and her universal and simple forms draw much praise.

The October 3rd lecture held in the Kyushu Ceramic Museum attracted not only the usual enthusiastic crowd from Arita, but many people from all over Japan; visitors from Tokyo, Gifu, Hiroshima, and Fukuoka certainly confirmed the high level of public interest in her work.

In the lecture facilitated by Teruhiro Yanagihara, the Creative Director of 2016/ project, she explained about her monozukuri process while introducing slides showing her production studio, representative works, and other projects.

Many people have a strong image of Ingegerd as a glass designer actively involved with such companies as Skruf and Orrefors; however, while at university she studied both ceramics and glass, and for some time she focused on ceramics.

She explained that her 10 years or so experience of monozukuri as a ceramic artisan significantly affected her later work as a glass designer. ”As a ceramist I used my hands to engage in monozukuri. That is exactly why I was able to sense how glass artisans feel and think, which allowed us to share our awareness at a deeper level than a mere relationship between a designer and artisans. This is a very important point as a designer.” Her comments makes us consider how we can better practice monozukuri in Arita.

Monozukuri with a high potential, created by a relationship of trust with artisans

Ingegerd said: ”Share time together, eat and talk together. Such things deepen mutual understanding and create a relationship of trust, and helps us all to get closer. Relationships like these serve as the base to ensure harmonious monozukuri. Her approach with an emphasis on communication with artisans is greatly affecting the 2016/ project.

Director Mr. Yanagihara commented: ”Ingegerd is always smiling and gentle, but in the monozukuri site, her perception is very sharp and sometime she makes difficult requests, but actually she helps us all raise our game.”

Readers would be correct in imagining that her uncompromising stance has influenced the project members, and good progress is being made in creating monozukuri with even more potential. 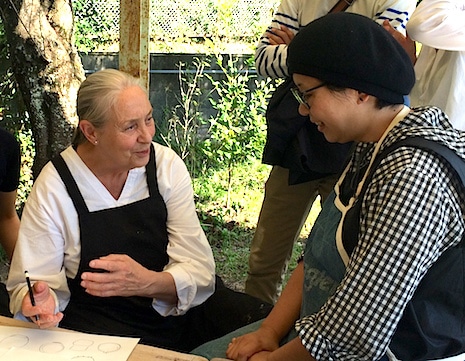 On the day after the lecture, at the Sehyou Kiln in Imari City, Ingegerd held a workshop for the first time in her life. Receiving her advice, participants developed their ideas and experienced the design and monozukuri process as practiced by Ingegerd. It was a very intimate, inspiring, and hands-on event.

Breaking free of the usual lecture-break-lecture seminar format, Ingegerd, as a living example of her philosophy of valuing shared time, especially conversation over a meal, hosted an outdoor lunch for the 15 participants, under the most beautiful of autumn skies.

While enjoying coffee after lunch, she announced the theme of the workshop: ”The act of drinking water.” ”With whom, where, and how do you drink water?” she asked, and requested her guests to sketch a memory involving water.

The design experience of participants ranged widely from those just interested in monozukuri, serious ceramic students, through to actual designers; Ingegerd spoke to everyone individually and discussed their design concepts.

Once the shape and form were determined, participants, helped by young artisans from the kiln, practiced throwing on a potter’s wheel. It was not easy for them to make the shape they wanted, but she said: ”Let yourself think and feel while you’re touching the clay. Me as well, I always turn the wheel first.” The group gained hands-on practice of her design process and through working with their hands, they experienced a new awareness.

The value of continuous production while adding new essences

The workshop’s apparently simple theme, ”The act of drinking water” worked as a koan* letting participants feel her Ingegerd-ness.

Ingegerd’s monozukuri style is based on ”a thing she wants” and ”a thing useful in life” and these two concepts give rise to the initial design and then by gradually adding improvements, the article keeps evolving, even though the basic concept remains the same. Respect is shown to traditional techniques and at the same time, new essences are added to update the product.

This concept fits hand in hand with ARITA’s goals for developing ”monozukuri for the next 100 years.” The year 2016, which is the 400th anniversary of Arita porcelain and destined to be a decisive turning point, is just around the corner; the experience of two days with Ingegerd certainly offered the opportunity to bring in new concepts from the outside, as in Mr. Yanagihara’s visionary phrase ”A View from Above.”

On October 25, at the Saga University Art Museum, the German designer Stefan Diez, another participant in the 2016/ project, gave a lecture, and ARITA’s exciting initiatives to meet the challenges of the next four centuries were introduced to local students, leaders of the future.